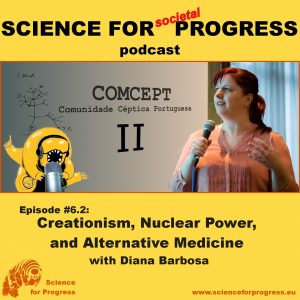 This is the 2nd part of my conversation with Diana Barbosa from COMCEPT, the Portuguese Skeptics Community (find the 1st episode here). In the first part of the episode we got an overview over scientific skepticism and what kinds of topics they would usually discuss. In a nutshell, skeptics are fighting against non-scientific viewpoints making their ways into mainstream opinion.

Now we talk a bit more in detail about creationism, nuclear power in the context of climate action, and alternative medicine:

Religion in and of itself is not necessarily a scientific topic, because religion and science don’t deal with the same fundamental questions. Where religion focuses on spirituality, science tries to explore and understand the natural world. However there are instances where religious writings make statements about the natural world and this is where things become problematic.

Creationism is the believe, that all life was created by one or the other deity. And we talk about creationists that believe that there is a contradiction between their religious dogma, and the theory of evolution, and abiogenesis – the theory that life emerged from non-living organic material, popularly named the primordial soup.

In the view of Creationists, accepting the Theory of Evolution is equivalent to denying their deity’s existence, which of course, they find unacceptable. In several countries there are influential creationist groups that are trying to change how evolution is taught in schools, and to insert ‘inteligent design’, a pseudoscientific version of creationism, into the science classes.

Then we talk about denial of scientific evidence in environmentalist groups. A recent hot topic is, of course, the fight against climate change. There is an ongoing debate over the question, how we can reduce carbon dioxide emissions in power production. Diana suggests that in contrast to the opinions of environmentalist groups, nuclear power is a viable option.

In the final part, we talk about “alternative medicine”. It appears that this lobby is strong enough to avoid being outlawed to begin with. Instead, Portugal recently decided to regulate these “professions”. They now require formal training in actual medicine. While this sounds like a good approach, in reality this gives anti-scientific practices legitimacy. And universities are now offering formal degrees in alternative medicine, further legitimizing these practices in the public eye. This is why Diana and COMCEPT are against the current regulation.