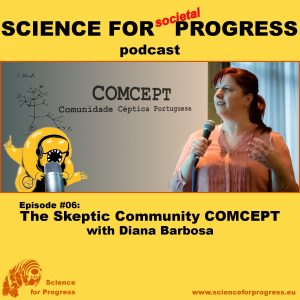 I had an extended conversation with Diana Barbosa (@diraquel on Twitter) from the skeptical society in Portugal, COMCEPT. This is the first of two parts to this episode where Diana Barbosa answers questions about what skepticism is, what skepticism is NOT, and how it is different from other, related movements. We get an overview of the goals and activities of COMCEPT meetings, and how to become a member!

Being skeptical means to be doubtful. Scientific Skepticism, however, isn’t simply doubtful of everything. The skeptic can be convinced by scientific evidence. Having started mainly as a movement to overcome superstition, such as the believe in the supernatural, modern skeptical societies deal with various forms of evidence denial in the public realm. COMCEPT addresses these topics in an educational way. They prefer informing the public over debating evidence denying individuals and groups.

Diana and her colleagues founded COMCEPT six years ago and have grown to almost 30 members since. However, they have thousands of followers on their facebook presence. At their monthly meetings, which alternate between Lisbon and Porto, COMCEPT discusses relevant topics of the day. It’s a flexible format: sometimes they watched a documentary or movie, and sometimes they invite experts to their conversations. They further have an annual convention, and published a book (in Portuguese) addressing the questions, what skepticism is. And finally they “award” the worst anti-scientific person or organization with the “Flying Unicorn” prize, each April 1st.

COMCEPT finances itself through membership fees and donations. Please consider supporting their cause!