This episode marks the official end of the second year of this podcast! (unfortunately, there was still no present for Bart – consider becoming a Patron to help!) Apart from the plans for year 3, Bart & Dennis discussed the hot topic of the week: a provocative tweet by Richard Dawkins on Eugenics, and the dos and don’ts, and pros and cons of university rankings.

Listen to the Full Conversation on Patreon!
END_OF_DOCUMENT_TOKEN_TO_BE_REPLACED

#4: Founding Science for Progress, and the representation of science in public – with Dennis Eckmeier

“We face a dilemma in conveying the scientific process to the public, and even within academia: Real science doesn’t fit the elements of effective storytelling.” 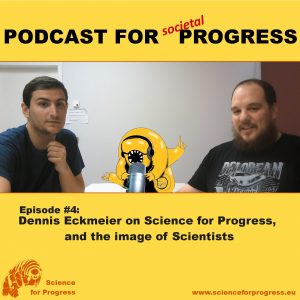 Dennis had been vocal on topics surrounding academia, science and pseudoscience on social media for several years. Thus, he readily volunteered to co-organize the March for Science in Lisbon, in 2017. He wants to disseminate the understanding of science, humanities and academia by the public, but also systemic changes within academia.