This summer climate change has finally made it back into public discussion in Germany. In the last episode on climate change, Rüdiger Eichel and I spoke about Fridays for Future and how the results of the election for the European Parliament reflected the increased awareness for environmental topics in the EU.

In this episode I talk to Tom Brown from the Karlsruhe Insttitute of Technology. He models how we can use different energy distribution systems to balance the fluctuating power production from renewable sources. There are many variables and options to consider. But the good news is that a carbon neutral economy in Germany should be possible.

We focus on Germany, because it’s Europe’s biggest economy. It is highly industrialized, and still very much reliant on fossil fuels for power production. And on top of transitioning away from fossil fuels, Germany is also fading out nuclear power as well. So, if Germany can manage a transition to a carbon neutral economy, every country should be able to achieve this, too. So it is worth keeping your eyes on Germany and the Energiewende.

Listen to the Full Conversation on Patreon!
END_OF_DOCUMENT_TOKEN_TO_BE_REPLACED

#3: The March for Science in Germany – with Dr. Tanja Baudson and Claus Martin

“I think our task as citizens and as people interested in science, and in truth, and in freedom, [is] to prevent that something like what happened in the United States is going to happen in Germany aswell.” – Claus Martin 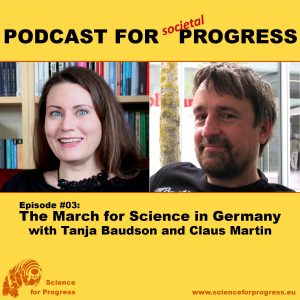 Mark the date! The March for Science 2018 is on April 14th! Last year, the March for Science in Germany was the largest (in terms of number of marches) outside the USA. Dr. Tanja Gabriele Baudson, giftedness researcher and visiting professor at the University of Luxemburg, and Claus Martin, a director and composer from Mühlheim, brought local organizer teams together, and coordinated them! In our first external interview, the two describe how they decided to take the initiative. We also cover what they identified as the issue underlying the spread of anti-science sentiments in Germany: a lack of trust in science in the population due to the influence of third party funding. And finally we talk about activities planned for this year’s March for Science in Germany.