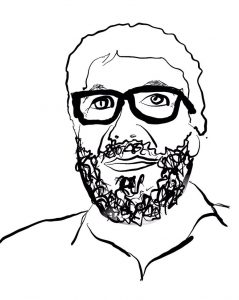 Dr. Mathis Riehle is Reader in Cell Engineering at the University of Glasgow. By documenting different things from a typical week of a Principal Investigator (PI), he will show how diverse the job of a scientist can be. His other passion are scientific sketchnotes that he takes while attending talks.

Mathis wants to show how interesting it can be to understand the minutia of life and how exciting it is! He specialized on how the body repairs itself, but he is also fascinated by science in general. For example, understanding flight patterns of dandelion seeds by looking very closely! On the other hand, Mathis feels very strongly against vaccination critics and when big pharmaceutical companies are lying (apparently, his mother had been prescribed with contergan but, luckily, never used it).

During his curation week, Mathis will be at a scientific meeting. There, he will give a presentation about his research, attend talks of other scientists, and meet his collaborators and students (PhD and undergraduate). In addition, Mathis plans to attend a meeting to prepare an outreach event at IKEA. Throughout the conference, Mathis share his sketchnotes with us!

Mathis grew up in Frankfurt am Main in Germany. After gaining a Diploma degree in Biology, he pursued a PhD in Cell Biology. He then applied for a Post-Doc position in Glasgow. The interview went ‘so so’, but he stayed a few more days during which he went exploring Glasgow. He came across an amazing cheese shop, in which by chance he met a collaborator of the lab he had just interviewed for. He called Mathis’ future boss saying: “I know he didn’t do better than [the other candidate] in his interview but he found the best cheese shop in Glasgow in a day…” so, in the end, Mathis got the job due to luck and serendipity.

After his PhD, Mathis decided to stay in Glasgow because of the interdisciplinary nature of the possible work, the collaborations and the mostly collegiate atmosphere.