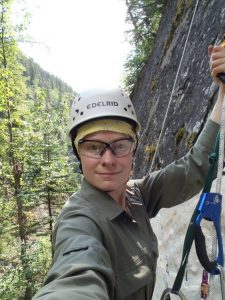 Lisa is a paleontologist from Canada, and was awarded a PhD in Biological Sciences by the University of Alberta. She currently runs a museum and research center for a non-profit organization. In this role she manages fossil collections (caring and advocating for British Columbia’s fossil heritage). But she also conducts her own research within the research center, in particular on fossilized tracks and traces (‘ichnology’) from birds of the ‘Early Cretaceous’ era (145-99 million year old).

Lisa is passionate about communicating science, and how people do science. She shares why Cretaceous bird tracks are exciting, and why fossil heritage is such an important part of our common history! Lisa uses social media to engage the public in her twin passions of ichnology and birds. First, she runs a Twitter guessing game called #NameThatTrack, where she posts a picture of a footprint or trace. She is impressed by the level of detail that people put into their ichno-diagnoses! Second, Lisa shares her excitement about birds with #BirdGlamour, where she showcases the amazing diversity of birds, our living dinosaurs. She does that using impressive skills in cosmetics! And finally, she runs the life-in-the-sciences blog

During her curation she will share with us her excitement for ichnology and birds! And she will share her own brand of science engagement using tales of her experiences, #NameThatTrack, and #BirdGlamour! 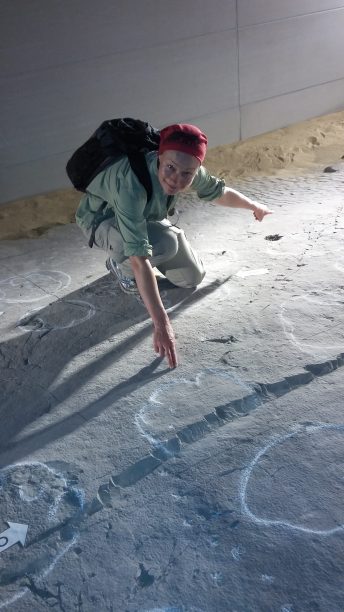 Early on, Lisa’s passion for paleontology was supported by her immediate family in Canada. She was introduced to palaeontology and the study of ancient life mostly through her great aunt Molly. Never having had the opportunity to pursue her life-long interest in natural history, she still kept up to date with popular science books. One of Lisa’s early memories is of her aunt showing her pictures of these awesome extinct creatures. From her Lisa first learned about scientists called ‘palaeontologists’.

Lisa’s career path is rather adventurous. She did her undergraduate degrees (double major in Geology and Zoology) at the University of Wisconsin-Madison, in the USA. After a false start with a master’s degree, she became a full-time Collections Manager with the ‘Peace Region Palaeontology Research Centre‘ (@PRPRC). This is a natural history research and archives center managed by a non-profit volunteer organization. After a couple of years she began and completed a M.Sc. at the University of Alberta, and then became a PhD student at the University of Alberta in Biological Sciences (Systematics and Evolution). Both degrees were completed while she worked full time at the PRPRC. Until March of this year (2018), Lisa was employed as a full-time Curator & Collections Manager. Unfortunately, their operational funding was denied for this year, so it does remain to be seen whether she will be able to return to this position. Stay tuned!