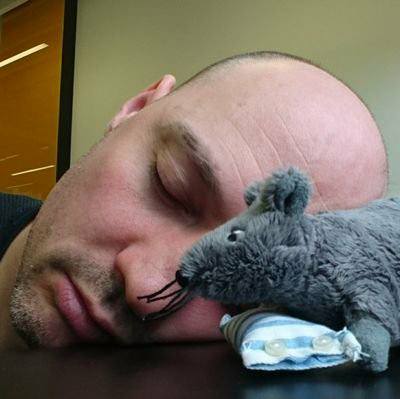 Lars (@Dittrich_Lars) is a German neuroscientist at the German Center for Neurodegenerative Disease. There he studies links between sleep and ‘prion diseases’, that include, for example, ‘mad cow disease’. He uses his Facebook site “Lars und die Welt”, as well as his youtube channel to share his passion for mind-blowing secrets of nature, and to inform about cognitive biases. He is concerned that so many people fall victim to their own cognitive biases. Lars is convinced, that everybody can learn to avoid many such mistakes by learning to think scientifically

Lars is also concerned about the public view of animal research. A majority of people seems convinced animal research could (and should) be abandoned without loss. The reason for this lack of understanding stems from a lack of communication from research scientists in the past. To change this situation, Lars joined Pro-Test Deutschland e.V., a small group of professionals in animal research who are determined to speak up and inform.

Lars takes part at science communication competitions such as ‘Science Slam’ and ‘FameLab’. He also appeared in ‘Bill Nye Meets Science Twitter’, a short segment at the end of each ‘Bill Nye Saves The World’ episode.

Lars grew up in a small town in Germany: ‘awesome for a child, and terrible for a teenager’. He then studied biology at the University of Cologne and continued with a PhD at the Ruhruniversität Bochum.

His drive had always been to continuously learn about new topics. However, he realized he might not be able to change his research subject after his postdoctoral phase. He decided that the neurophysiology of sleep would be a subject he could stick with.

He then moved to California to learn all about sleep neuroscience. Luckily, he happened to enter the field when it experienced a boost: first, the latest methods in neuroscience research – optogenetics – resulted in exciting new results. This attracted high profile laboratories to join this research field. And secondly, there was new evidence that sleep may have a protective role against neurodegenerative disease, such as Alzheimer’s. So, laboratories studying Alzheimer’s were now also interested in studying sleep.