#8 Cognitive Biases in Science and Society – with Dr. Bart Geurten 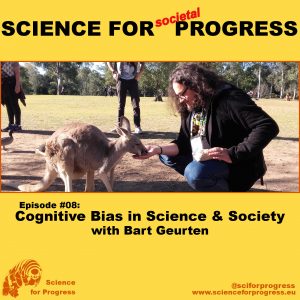 Science compensates for the shortcomings of human cognition. It allows us to apply methods of investigation that are independent of our own subjective notions and irrationality. As a result we have overcome common sense, traditional beliefs, and other misconceptions through thorough investigation. We even describe and utilize phenomena that are as incomprehensible as quantum mechanics, which defies our everyday experience in unimaginable ways.

There is, however, a real struggle, here. Just like our brain perceives the non-existent ‘Kanizsa’s Triangle’ (picture on the left), we make certain identifiable mistakes in cognitive thinking, too. This can really impact the way science is conducted and results are interpreted. Because of this it usually takes whole communities of scientists to work out and refine scientific theories.

In this episode, I talk about heuristics and cognitive biases in science and society with neuroscientist Dr. Bart Geurten. Bart is no cognitive scientist. He works on motion vision and locomotion in fruit flies. But coming across the work of Daniel Kahneman and Amos Tversky on Prospect Theory, he decided to discuss cognitive biases with students in a seminar at the University of Göttingen (Germany).

When I asked Bart to record this episode, we were in a campervan on a highway in Australia. It was the middle of the night, we were both sleep deprived and jetlagged, and he was having near death experiences because … well, I don’t usually drive on the wrong side of the road. These are the lengths we went for this podcast, so I hope you all appreciate this!

Most of what we discussed can be found in Daniel Kahneman’s famous book ‘Thinking Fast and Slow‘. I wikipedia-ed most of the topics for you:

Correction: The unusual series of roulette results occurred in Monaco, not Macao.