science is essential to our society at large, and if we don’t support the humans who study it, we aren’t supporting the science or the society. 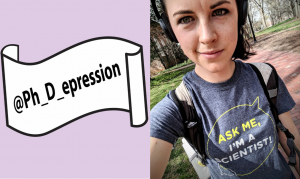 Susanna Harris is a PhD candidate in microbiology at the University of North Carolina at Chapel Hill, in the USA, and she runs a website to support visibility of mental health in academia (@ph_d_epression). She is really interested in supporting the people who do the science.

During the first half of her curation on @sfprocur, Susanna Harris will convey how bacteria exist all around us in incredibly complex communities. For the second half, she will focus on how and why we can support graduate student and academic Mental Health.

Susanna Harris attributes her interest in science to her father, a high school biology teacher. She spent her childhood days playing in his classroom and he constantly appreciated her asking questions, and getting her excited about the world. She decided to become a scientist about halfway through high school. They had a two-day course on bacteria and viruses in her Advanced biology class, and she thought it was ‘the coolest thing ever’. After graduating from college she became a PhD candidate, so she can answer her own questions in microbiology.