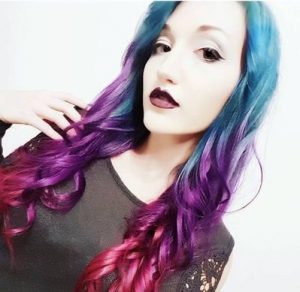 “How was I supposed to explain what I study to my mother, who went to a vocational school and didn’t even have a clear idea what a molecule, a cell, or DNA actually is?”

Stephanie Kainrath is a molecular biologist who is working on her PhD at the Institute of Science and Technology, in Austria. She wants to spend her life learning new things, and a PhD seemed like the perfect opportunity to turn learning and discovery into a full-time job.

Stephanie is particularly passionate about communicating science to lay audiences. She has no other scientists or academics in her family. Thus, it’s a necessity to her to be able to explain her work in simple terms. She realized that science communication reaches its limits where primary education had already failed.

We are constantly bombarded with ‘facts’ and have to decide whether they are true or not. In order to deal with this situation, people need a basic grasp of the sciences. This is why Stephanie tries to give lay people a better idea of what our world is made of and how it works. Stephanie used to spend a lot of time, for example, on social media arguing with people who don’t ‘believe’ in the existence of antibodies, viruses, or even infectious diseases. Her goal wasn’t primarily to change the minds of these people. More importantly, she challenged these misguided believes publicly, to convince silent readers of the scientific evidence.

On @SfProcur, Stephanie will discuss the necessity and impact of early science education, and how ‘science outreach’ could actually reach those who aren’t already interested in science. She doesn’t have a solution to these problems, but wants to identify the core problems.

Stephanie believes that lay audiences without a scientific background, need to be reached, most of all. Thus, she wants to motivate other scientists to do science communication as part of their daily lives. More scientists should feel encouraged to explain their work to people without a background in science.

Stephanie grew up spending a lot of time exploring the forest with her grandmother. Together they named the plants, insects and birds they found. And they would look up the names of species they didn’t recognize. Stephanie also collected caterpillars and tried raising them in glass jars to watch their metamorphosis. In high school, she had two very ambitious and great biology teachers who further fueled her interest in the life sciences.

She always wanted to understand things on a deeper level, and was frustrated by the science education in school. She found her text books insufficient – she wanted to know how exactly the caterpillar turns into a butterfly. In her 6th year at school, one teacher wanted to reduce her grades because she was ‘asking too many questions’. She also was often dissatisfied with her teacher’s answers: ‘You will learn that next year’. Ultimately, all those unanswered questions would become a major driving force behind her choice of a career path in science.

She then studied Physics, because she was interested in astrophysics and quantum physics. However, she felt that math was too high a hurdle for her studies in physics. Being only 17 years old, she felt overwhelmed by linear algebra and analysis. It took her a long time to overcome the feeling of failure, but the detours in her education were not all bad, and helped her grow as a person.